The goal of this project, funded by the Lower Columbia River Estuary Partnership, is to produce a spatial data set describing the distribution of habitat cover types along the lower 230 km of the Columbia River, from the mouth to Bonneville Dam. To accomplish this, we are classifying several types of remotely sensed imagery including: Landsat 7 ETM+, IRS pan, and CASI hyperspectral.

The ability to resolve estuarine habitat features depends on the spatial and spectral resolution of these types imagery. Since these images of various spatial scales will be geometrically corrected (referenced to real-world coordinates), together they will form a spatially linked hierarchical data set.

Landsat 7 ETM+ imagery, which covers the entire study area, is too coarse to resolve estuarine features less than 60-100 m in size. Therefore, we will use the TM imagery to develop a broad-brush description of the status of estuarine habitat cover classes and establish a context for additional study. In addition, we will use the classified TM data to prioritize areas in which finer-scale CASI imagery will be collected and analyzed. 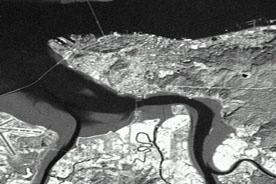 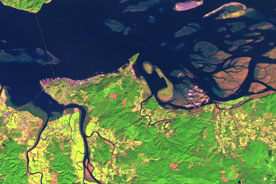 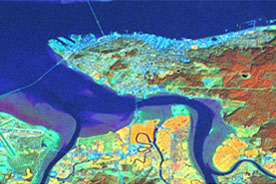 Results from this study will be used by the Estuary Partnership and its cooperators to: (1) develop indicators of “habitat health” and biological integrity; (2) develop definitions of “critical salmonid habitat”; (3) identify and evaluate potential wetland conservation and restoration sites; (4) track exotic and invasive species; and (5) develop an understanding of how estuarine and riverine habitats have changed over the past 200 years.

This study focused on estuarine and riparian floodplain habitat cover types, which are important to native species, particularly juvenile salmonids. Results from this study are meant to provide support for the multiple efforts currently underway to recover 12 species of Columbia River salmonids identified as endangered or threatened under the Endangered Species Act.

We relied on the help of 40 volunteers to (1) measure substrate and vegetation ‘habitat types’ in 16 X 16 m sample grids, (2) set out and

GPs targets that could be located in the imagery, and (3) make on-the-ground radiometric measurements.